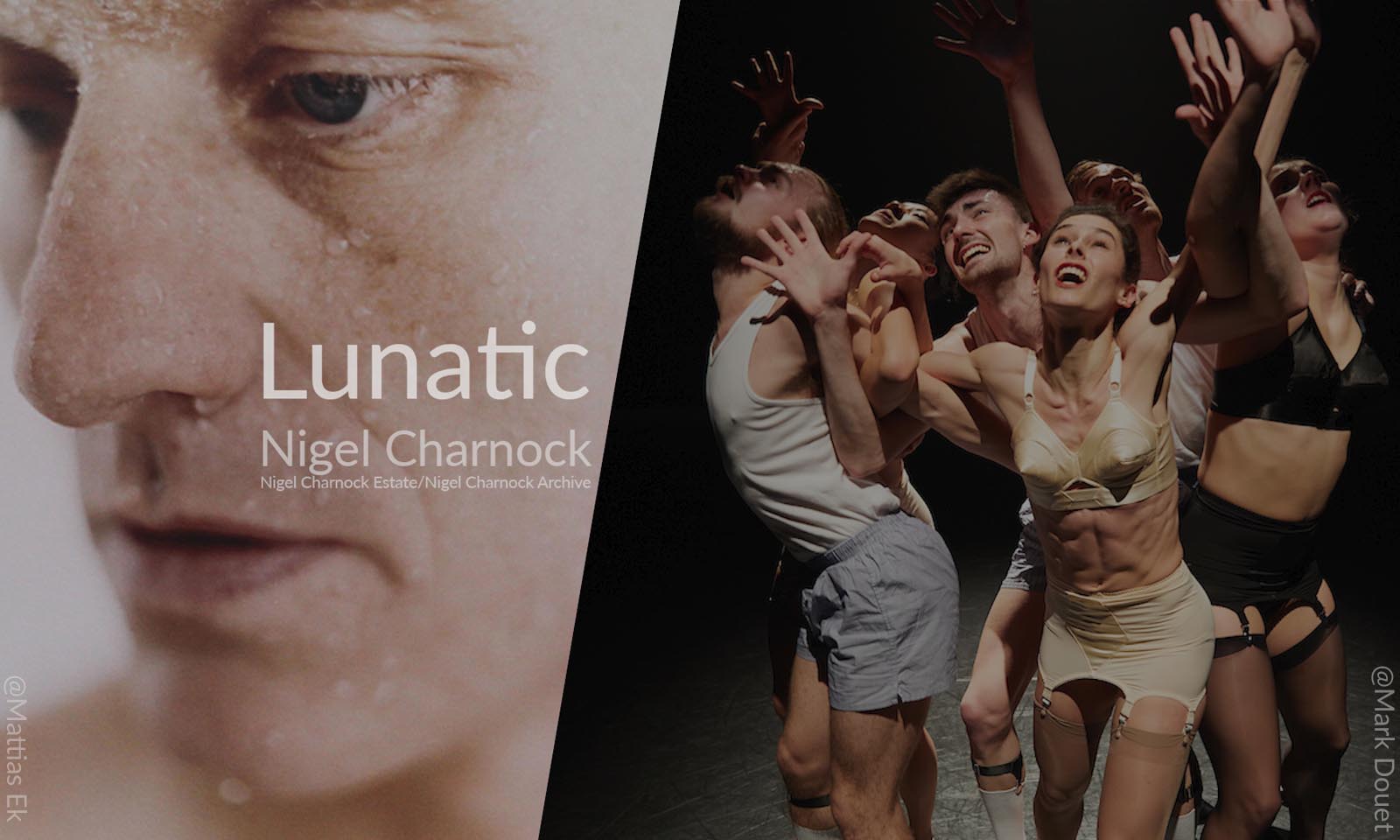 2020 marks the 8th anniversary of the death of dancer and choreographer Nigel Charnock.

This year also marks the first re-staging of his work since his death. National Dance Company Wales restaged Nigel’s work Lunatic in spring this year but after just three performances, the remaining UK tour has been cancelled due to Covid 19.

Nevertheless we wanted to celebrate this first revival, and have put together (made available?)  a digital selection of work online at Nigel’s Vimeo channel:

A visually rich video discussion about the re-staging of Lunatic in 2020 for National Dance Company of Wales with former artistic director Fearghus Ó Conchúir and Gary Clarke. Using video of the performance and stunning photography of the process alongside a journey through Nigel’s archive the discussion takes the audience through the process of remounting Lunatic in Nigel’s absence.

“Nigel Charnock is back from the dead – with a warning straight from hell.    Love him, hate him, but whatever you do SEE HIM.

“With a devastating beautiful performance, Charnock reveals body and soul in an obscenely hilarious show about love, sex and death.”

Verbal and physical slapstick suggests darker truths behind love, sex, and relationships. This danced monologue is an interpretation of a sequence from Nigel’s 1995 solo show Resurrection. Performed by Dan Watson.

A duet for two men taken from Still, a long form piece of work Nigel choreographed for Candoco Dance Company in 2009. At the time he commented “with every piece I make there is part of me in there, its always about people and how people deal with each other, its always about relationship rather than relationships, and more so in this piece about the loss of that, about losing someone.” (extract the Candoco Archive https://youtu.be/3Yo9eUJfkg4 ) Performers Darren Anderson and Christopher Lloyd Owen originated the work with Nigel in 2009.

The Nigel Charnock advisory group are happy to make a first announcement regarding the archiving of  Nigel’s work. The Nigel Charnock Archive is an initiative to collect and preserve Nigel’s work for public access and performance research. A Facebook page has been set up to keep people informed of the developments over the next few years.

The archive is in the process of being complied, and is currently edited and maintained by Graham Clayton-Chance and Nick Mercer.

For more updates from the Archive and access to video documentation;

If you have any material you can donate to the Archive please get in touch with us at mail@nigelcharnock.co.uk .

An advisory group has been set up to manage enquiries relating to Nigel’s projects at  mail@nigelcharnock.co.uk

Nigel Charnock, the performer, choreographer and director, died late yesterday at St Christopher’s Hospice in South London. He had been diagnosed with Cancer of Undiagnosed Primary in the middle of June this year.

Nigel was responsible for an extraordinary body of work. A maverick and totally captivating performer, Nigel ruptured the boundaries of performance using different disciplines and media to redefine dance as a genre. His joyful, humorous, uncompromising, all-singing-and-dancing, professional working attitude has influenced and changed the lives of artists and performers across the world.

Described in The Independent as “body poet and word dancer… a virtuoso in daring.”, Nigel was midway in the development of one of his most ambitious projects to date for his own company. A short section of this evening of work entitled 10 Men was previewed, to unanimous acclaim, at British Dance Edition and Duckie earlier this year.   Nigel is internationally acclaimed for a string of unique solo performances which include Human Being, Hell Bent, Original Sin, Resurrection, Frank and most recently One Dixon Road. Renowned for his inspirational teaching and mentoring, Nigel worked regularly and relentlessly with dance centres and independent artists throughout Europe, Israel and Canada, undertaking many choreographic commissions.   In recent years he created new work for Louise Lecavalier (Canada), Candoco Dance Company, Ludus and National Dance Company of Wales (UK) as well as ongoing collaborations with jazz musicians Michael Riessler and Gwilym Simcock. Beginning his performing career in Ludus and Extemporary Dance Theatre, Nigel became a founder member of DV8. He formed his own company – Nigel Charnock + Company in 1995 and was Artistic Director of Helsinki Dance Company from 2002 to 2005. He toured Stupid Men (an ensemble of male performers) from 2006 and enjoyed an inspirational partnership with Wendy Houstoun. As a celebrated creator and performer throughout the world Nigel was simultaneously acclaimed as both “a national treasure” (Arts Council of England) and branded “the unreconstructed bad boy of physical theatre” by London Metro.

A Night with Nigel

On Saturday 29 September 2012, A Night with Nigel took place at Greenwich Dance, London. Thank you to those who shared in the experience and to those who sent thoughts from afar. Huge and heartfelt thanks to the following people and organisations who made the night possible:

Thank you for all donations received so far.

You were too much.
Too funny. Not just plain funny but, you know: silly funny, witty funny, biting funny, cutting funny, ferocious funny, despondent funny, frightening funny.
And physical too. Yes too physical by half. Too body, body. Too bodily body to be theatre and too entertaining to be serious. So they said. I think you were seriously entertaining…
and fast. Always so fast. Too fast to be pinned down, too passionate to be tamed, too lawless to be controlled, too anarchic, too articulate for fools and way, way, way too witty, twitty and gritty with all that word play. All that word play.
Playing itself out –

And while we’re at it, you were too human too. Yes, much too human. Too daringly human. Leaving nothing out.
Unedited.
Yes, you were much too unedited for all that good taste. All that form and line and shape and all those other desperately important things called ART.
Just too in-yer-face. Too rude, crude and dirty for comfort.
Dark too. Dark and dangerous. Yes. Dark, dangerous and agonized. Too agonized, too hysterical, too over-the-top.
Too over the top and verbal. Vocal. Verbose. Vomiting verbosity all over the place with that mouth and jaw of yours.
And merciless too. Mercilessly tender. Unsettlingly tender. Virtuosically tender…..and raw.
You always looked too raw. Too real. Too exposed and too vulnerable for your own good.
Way too vulnerable with that robustly fragile, translucent, ghostly white, boney body of yours sweating away.
Yes. You were just too sweaty. Too sweaty, silly and stupidly sexy.

On and on about the same stuff all the time.

Yes love..… LOVE IN CAPITAL LETTERS – in small letters- love from a distance- love up close- love gone wrong- or nearly right-love lost-love found-love on the rebound- in sonnet form- in acts- spat out in tracts— garbled moves- strangled puns- whimpered cries- forlorn sighs- high kicking fights- spangly tights- all about love-shoving love into the air and watching it fall- unrequited love- forbidden love- unachievable love— yes banging on and on and on about love – – love songs- love poems- and love dying- dying love- love dying a death- yes- love dying a death –- and then breathing life back into the dying- and loving it all over again – on film- on stage- in words- and yes- in life- dying a death in life-too real and raw- too fragile- too quick- dying fast- dying too fast-too quick-dying way too quick-and too slow-
dying a slow slow quick quick slow death in life– dying a fast death in life- dying a fast death slowly in life-
Dying in life in love.